Wilderness First Responder: What It’s Like To Use It

I didn’t notice that Jen was in this photo at the time that it was taken. If I had, maybe things would’ve played out differently.

On July 2nd [2017], I woke up at 4a.m. in my hammock. I packed up my sleeping bag and quietly tossed it into my already loaded 4Runner, doing my best not to wake anyone else up. A few friends and I had been camping in the Popo Agie Wilderness outside of Lander, Wyoming near the Wind River Range.

By 11a.m. I was putting on my snowboard boots on the side of the road on Beartooth Pass, around 250 miles away—just shy of the Montana boarder. As I cinched down and tightened my boot, the lace frayed and snapped. Great. I kicked myself for forgetting to bring a spare. Had I just driven over five hours to ride a couloir in duct taped boots? Maybe. Sorry, mom.

I looked across the dirt outcropping I was using as a parking lot, and approached a Subaru stuffed with gear and the two owners of all that gear. Introducing herself, Jen quickly passed me an extra lace, and introduced me to Matt, while smiling and pointing to the chute I’d also been eyeing. Both were snowboarders. Rad.

At the top of the pass, and at 10,947 feet, Matt and I eyed the line below us with brandished smiles on our faces. Jen had stayed below on the ridge, and planned to ride a different chute than us. They were working on filming a snowboarding edit, and Jen was the photographer. Super rad.

Matt strapped into his board to drop first. Matt had reached the safe zone below the rock face, and hollered a nice, crisp “CLEAR”. I took a photo from the top of my line, and then dove into the chute. I met him at the bottom with a fist bump after dancing my way through the chute and the soft, summer snow conditions. 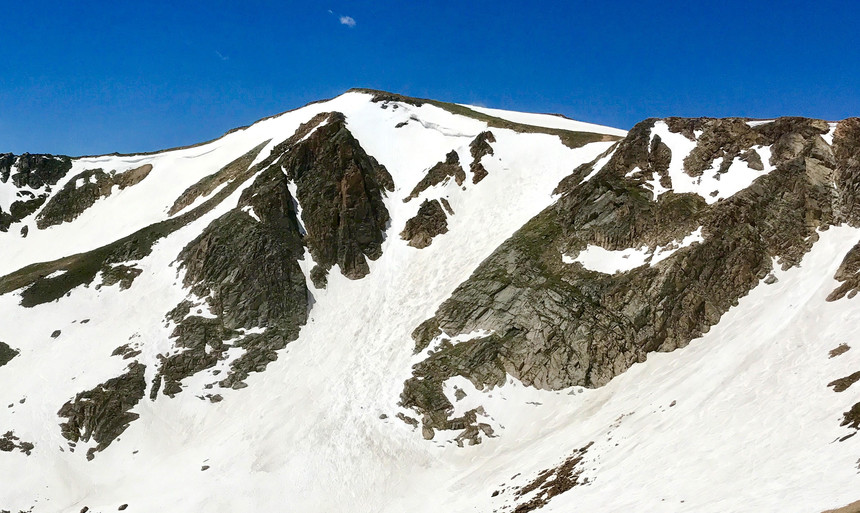 I looked back up to see Jen standing at the top, on the other side of the chute from where Matt and I had descended. She was standing on the overhanging cornice, the one on the left in the first photo. Leaning out to get eyes on her route below her, she held her board and yelled something I couldn’t quite make out. Not good, not good at all. Bad.

Jen and Matt had come up from Salt Lake City, Utah. They were searching for snow, too. We wild ones. We crazy, committed, fun-seekers, and pursuers of passion. Out here snowboarding in July—something the average person probably would never do, let alone understand. I saw it when I met them in the parking lot. It was in their eyes. An unspoken acknowledgement and understanding that we shared.

A loud scream followed the sharp crack against the rock. It belonged to Jen. The following outcries were interrupted by gasps and thuds. The source of the noise came from the other side of the rock wall from where Matt and I were perched. Turning toward the source of the sound, Jen emerged from the neighboring chute. She was sliding, and gaining speed. There was no snowboard on her feet. Her head and face were a dark maroon, the same color that highlighted her path down the snow. Jen hadn’t been wearing a helmet.

When we had been standing on top of our line, Matt and I had both noted the clouds encroaching on our sunlight. The day was warm, especially in the sun. The snow was soft, but firm. Snow tests had shown that the pack was solid and didn’t propagate or produce slough. Our turns had cut the snow like butter, and remained etched in the slope. Though my hoody was raised, covering my neck from the sun, I could feel a slight breeze penetrate the fabric. Flow state.

Without looking at each other, Matt and I sprang across the slope. We weren’t aimed at Jen, but below her. We were riding toward where she would be by the time we got there, so that we could intercept her slide. She was sliding fast, and we needed to physically catch her so she wouldn’t careen to the bottom.

Beneath the flowing blood, Jen’s darting eyes told me two things. First, that she was awake. Second, that she was really, really scared. While I was quickly removing my backpack to get at my first aid kit I asked a question that I already knew the answer to: “Do either of you have any wilderness medicine training?” I broke the silence, took a deep breath, and quickly followed up with “I’m a wilderness first responder, can I help you?”

Recreating in the backcountry comes with risk. That risk is often multiplied significantly by a lack of cell phone service to call for help in an emergency. I explained what I was doing as my hands searched Jen’s head and neck for injury. I forced a smile. I hadn’t found anything other than the gash in her forehead, a broken nose, and the baseball sized lump protruding from above her opposite eye. At least three points of contact. 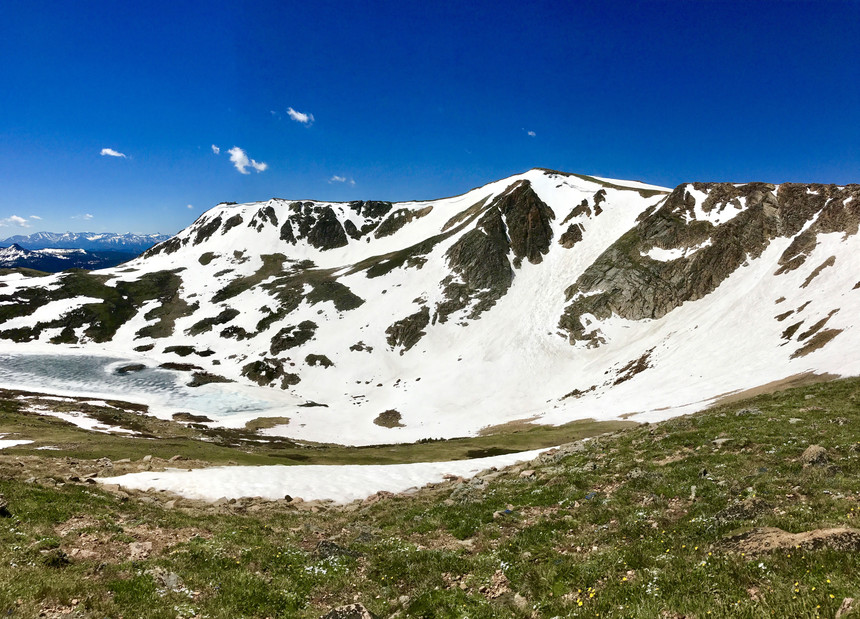 The flash of lightning was concerning. I tried for a tone of voice that wouldn’t cause unnecessary alarm, but would convey urgency. Jen’s vitals were remarkably stable. She had not lost consciousness, and was completely coherent which was a miracle. She knew her name, where we were, the time of day, and what we were doing. She even knew who the POTUS was, but admittedly wasn’t happy about it. She cracked a smile.

My search for injuries to the rest of her body had come up empty, except for minor scratches on her hands and wrist from trying to cease her slide down the snow. Even with my warning, I could tell that my yells for help and waving arms were making Jen uncomfortable. But they were necessary. I was only one person, and Jen needed to get to a hospital, now.

If the people in the distance on the road had heard or seen my efforts to communicate, I couldn’t tell. I monitored Jen’s vitals, and any other signs that would indicate a change to her state. However, I worried about injuries that I couldn’t see that could be forming below the surface. Since Jen didn’t have her snowboard, she had to slide down the rest of the way on her butt. Matt and I flanked either side of her to support her while she slid. We also used the handle of my avalanche shovel from my backpack as a “brake” for her to dig into the snow.

At the bottom of the run, and at the intersection of the snow and grass, there were a couple of hikers that had heard my calls for help. They had seen everything. They saw Jen’s fall as she was strapping into her snowboard, which the rocks had shielded Matt and I from. After the steep hike up the grass and rock to the parking lot, Matt drove Jen to the hospital 45 minutes away in Red Lodge, Montana where she would get scans of her head.

The hikers returned to their car, and continued on to Beartooth Lake. I hitched a ride back to where we three had left my 4Runner at the top of the pass, and silently stowed my gear. I untied my boots, pausing to examine the lace that Jen had handed me. A faint smile emerged on my face in stark contrast with the knot in my stomach. It was 2pm. I exhaled, and embarked on the five hour trip home.

Jen’s courage and ability to maintain her composure in the face of significant adversity is what got her off of the mountain, and eventually to the hospital. That, and Matt’s equal command of composure; and his unrelenting commitment to get our trio off of the slope and to the base of the hike up to the road. Jen was able to walk herself out. She was able to walk away alive. A week prior, someone else had fallen down a chute in Beartooth Pass while backcountry skiing. They, unfortunately, did not walk away alive. Jen was lucky.

My phone buzzed around 7pm. It was Jen. Her scans had comeback clean. Phenomenal.

Like Loading...
← Meet Colby Thompson: A Look At Authenticity in Vanlife
Moving Around Can Be Hard: Thoughts on place, purpose, and people →