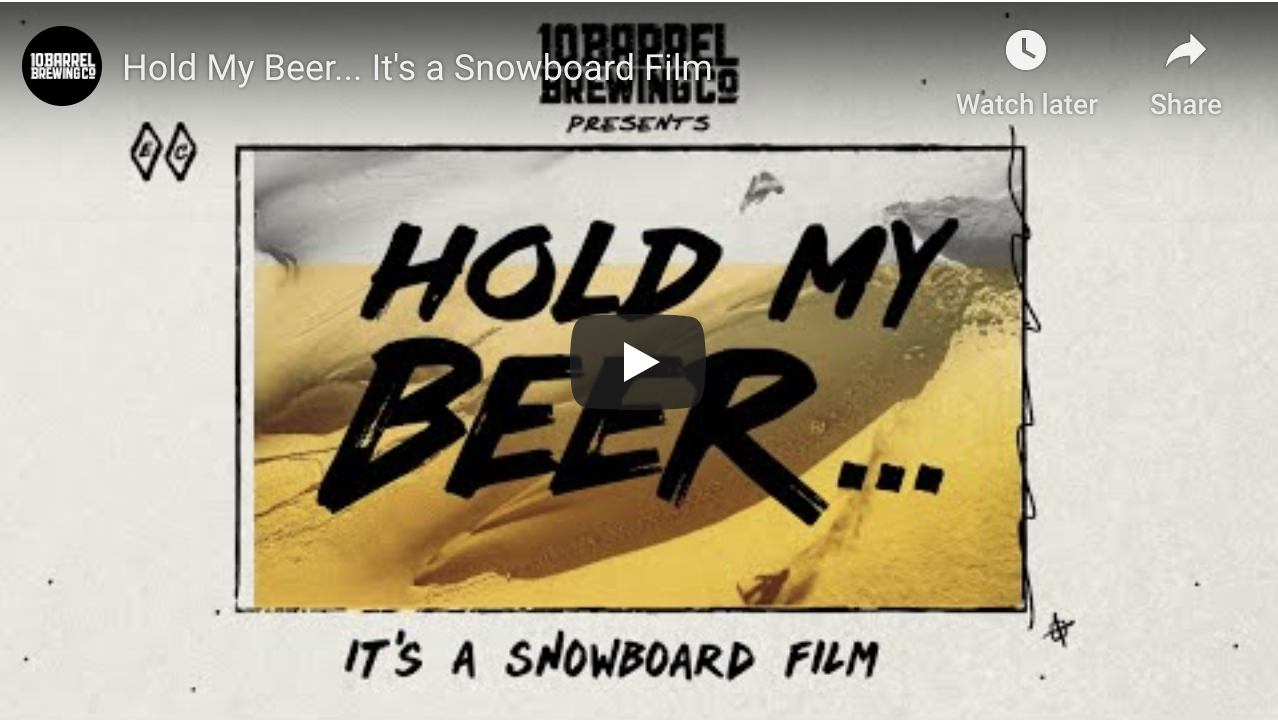 If you’re like me, that means a lot of scrolling, and quite a bit of combing through content in search of something that a) I want to watch or listen to, and b) something that will hold my attention. So the #QRS, or the Quarantine ReScreen, marches on. To read more about the origin of the #QRS, click here.

Growth is a natural process over time. People age, time passes, experiences come and go. The difference between growth and development? Intention. Growth is inevitable, development is optional.

In order to develop, there needs to be an understanding that the input values affect the output values. If the input values can change, then the outcome can be intentionally altered or controlled. In the world of snowboarding, development is most often described as progression. Progression in snowboarding typically looks like more amplitude, more spins, more managed risk, more, more, more. The interesting and emerging trend in snowboarding includes progression that is focused on less.

The developed athlete arc encompasses a discipline change or crossover. Riders that emerged as park contestants pivot to big mountain riding and are tasked with furthering their skill sets so that they can succeed in a new arena. Their new focus is matched with new goals and new input values in order to yield new output values.

This process isn’t necessarily a new phenomenon. Pro riders have been pivoting to different disciplines for years. The new element of this equation is that the media spotlight is starting to reward the pivot more than it ever has. The money, sponsorships, and accolades haven’t always followed riders through an athletic rebrand. A lot of the time, an athlete’s directional change itself includes walking away from center stage and the notoriety associated with it.

10 Barrel Brewing is relatively new to the snowboard scene, but their history lends itself well to the developmental pivot model. The Bend, Oregon craft beer company can be attributed to brothers Chris and Jeremy Cox who left the business world to buy a bar. JC’s Bar and Grill came to fruition in 2003 and in 2006 the brothers swiveled to the brewing side of the food and beverage industry, creating Wildfire Brewing. A trademark infringement led to a name change in 2009, birthing 10 Barrel Brewing Company.

Anheuser-Busch InBev acquired 10 Barrel Brewing in November of 2014, setting off a chain of less than pleased reactions from craft brewers and consumers alike. The Brewers Association even opined that 10 Barrel’s craft beer designation would be revoked given that its ownership was by that of a non-craft-beer member of the alcoholic beverage industry.

With their newly abundant resources, 10 Barrel Brewing Company pushed onward. They continued to innovate and develop thanks to technological improvements, a broadened distribution network, and access to grow their own hops on Elk Mountain Farm in Bonners Ferry, Idaho.

What appeared to originate as a run-of-the-mill promotional event, the Hella Big Air series effectively solidified 10 Barrel’s foray into snow sports. The series first appeared in 2015 and was by all definitions, a party at Mt. Bachelor. The series continued and adopted a contest format while still encapsulating the spirit of a snow sports après party with music, costume themes, and of course, drinking beer outside.

The event series’ success gave way to a bigger endeavors. A lot of mountain town companies have a “powder clause” that grants employees the day off to ski or ride if mother nature provides “x” amount of new snow. For the 10 Barrel Brewing company, that number is 6 inches. Their Pray For Snow “powder clause” brought with it a winter ale and a full length snowboard film of the same namesake.

“Pray for Snow: The Movie” released in 2018 and features big names like Ben Ferguson, Eric Jackson, Lucas Wachs, and Curtis Ciszek. The film, well it came out swinging. With a stacked athlete roster and the budget to back them, 10 Barrel made quite an entry into the ski and snowboard movie scene. They also played to each athletes’ strengths and provided a variety of terrain, style, and personality.

A couple of 10 Barrel athletes also appeared alongside each other in another notable project in 2018. Eric Jackson’s film, “Alignment“, provides insight into his own life through snowboarding, fly fishing, and congruence found in the mountains. In addition to Eric’s brother, John, Curtis Ciszek is notably involved in the project.

Eric Jackson is an industry icon and backcountry powerhouse. Gaining his first sponsors at age 11, the now 26 year old Lib Tech rider has a list of film appearances and accolades that make him a cornerstone of the current industry. From his early days with Standard Films, to earning Rider of The Year with the People crew in 2012, to working on The Fourth Phase with Travis Rice; E-Jack has developed his snowboarding from hip-hop infused competition riding to big mountain prowess that promotes an inner balance and cohesiveness with nature. You can hear Eric describe his evolution in his own words on episode 101 of The Powell Movement.

Curtis Ciszek has established himself as a consistent staple in the snowboard world as well. He started off with Mack Dawg Productions, Volcom, and the People crew and his athlete progression arc has followed the pivot as well. A less is more approach suits him, his snowboard, and his fly rod. The Drink Water athlete is on a K2 Snowboard team that represents the culture of snowboarding, and that relishes the pureness of sliding on snow in any fashion. The glitz and glam don’t seem to matter much to Ciszek and his riding says that much for itself. The dude loves shredding.

Check out E-Jack and Curtis in Alignment below.

Pray For Snow: The Movie established credibility on the snow scene. It showed segments of 10 Barrel’s beer operations, played to their athlete’s strengths, and included a solid mix of park, cliff, tree, and big mountain riding.

Much like the emerging athlete arc, 10 Barrel settled out a bit in their next project, Hold My Beer… They had fun. They rode for the soul. And they enjoyed partying with their friends. With their credibility already established, they came out of their shell and revealed their personality.

Maybe you’ve changed a lot in quarantine. You’ve likely grown, but maybe you’ve developed. Partying during quarantine is different, but it also doesn’t mean that you haven’t been doing it. Maybe you’re training during quarantine, too, and are going to be ready to get after it when you get the green light. Or maybe you drank too much and imagined you were shredding. You’ll find a solid mix of both in Hold My Beer… Regardless of which category you fall into, fall into your couch and hold onto your beer while you watch the 10 Barrel Team light up your screen.

Like Loading...
← Quarantine Rescreen | The Manboys | UMAMI
An Interview With Derek MacDonald On The Occupation Wild Podcast →